Watch the Full Live Playback of the Virtual Tea Festival

Tealet presents a free community co-created tea festival featuring presentations and interactive tea experiences from around the world in the comfort of your home.

Watch all the individual Presentations:

Suresh's family is a established small tea grower in the Niligirs region of Southern India. In 2009 the family decided that they wanted to pave a new path for their business which was struggling in the commodity system of bought leaf factories. Suresh along with his brother Parbhu have employed biodiverse agriculture practices as well as diversified their processing and marketing methods to bring higher value to their family and their community. The family is now prouced some of the highest quality, handmade teas in India.

James Norwood Pratt is the cherish American Tea Sage and author of several tea books including the Tea Dictionary, The New Tea Lover's Treasury, The Romance of Tea, and The Ultimate Tea Lover's Treasury. He can often be found at tea festivals across the country bringing the tea community together with love and laughter.

Jon Cooper the founder and co-owner of PekoeTea Edinburgh. He has been involved in the tea industry since 2005. They import most of our teas from source. We have a sister company called Adventures in Tea, which blends and flavours teas from scratch. I oversee all aspects of this. I have in depth knowledge of technical aspects of tea gorwing, processing, blending and tasting.

Dani Lieuthier - All about Mate

Dani Lieuthier is a tea explorer and has travelled the world doing research about Camellia sinensis in 11 different countries. She owns Instituto CHÁ (@institutocha), the largest tea school in Brazil, Caminho do Chá, the first handmade tea brand in Brazil and is a co-founder of the Slow Tea Association. As a researcher, she has social projects with indigenous peoples in Brazil and helping to protect their knowledge about cure through herbal teas. And is working with a study group on sensory analisis on erva-mate (Ilex paraguariensis), to define terroir characteristics on that traditional drink. Dani is consultant and tea taster for many tea brands, such as Leão, which is Coke's local tea brand in Brazil.

Ashley Haywood is a mother, a wife, a 9-5 go-getter, a health nut, and I like to travel. Simplicity is important to her so that I can juggle all of these things. For years she was looking for single-serve sweetened tea bags because it just made sense for my on-the-go daily activities. Finally one day, after 10 years of empty searches, she sat down at the kitchen table and cut open grocery store tea bags and added sugar to them. The concept was born, but what happened next became not only important to her, but to the world.

Priscila Vazquez-ruilova started discovering tea 8 years ago, during a tea cupping in Argentina, she continued studying about tea taking classes, reading books, traveling to the field of country producers. She started to study ChaDo 4 years ago. She learned from an amazing tea community in Mexico. Now she lives in South America, Ecuador. And is starting a way of tea there.

In practicing the art of Gong Fu tea for the past 5 years, Ashish's life has been transformed. His approach is to create a ceremonial environment where we can explore the tea, our senses, and ourselves to the fullest. He's fascinated by the medicinal qualities of tea – specifically the way it can activate and purify the energetic channels in our bodies and minds leading to gentle and peaceful shifts in perception. Over the years, he's found that drinking aged, quality teas help to relax and repair the body and mind. Now it's his pleasure to share this experience with others.

Gabriel has worked in various aspects of the wine industry for two decades and has fallen in love with Chinese tea in the last five or so years. He is fascinated by the similarities and divergences of these two beverage cultures. Most recently he has been spending time establishing the Bellingham Tea Festival. He also founded Waterbear Tea Collective which is housed in the Alternative Library in Bellingham, Washington.

IT Project Manager and Business Analyst by day, milk tea consuming loose leaf blender by night, Leo undertook the path of the leaf to spark a sense of joy in both himself and the people around him. He owns Ruby Lion Tea, founded in 2016 out of LA, and started it to add a splash of color and personality to the daily ritual. By doing that, he would hope to help people learn about a new side of themselves by drinking with an intention or aspiration, invigorating them to challenge norms and realize their latent talents and potential.

Omar practices and shares tea service as an exercise in abundance, ease, and flow. A living, breathing, fluid affirmation that the universe only knows abundance and that we are inextricably a part of that great flow. To be seen and known and loved just as you are in this moment. To have each sip of tea poured lovingly just for you is to sit grounded in the knowing that everything in this moment is provided for. To sit at Omar’s tea table is like being family; to be loved and accepted just as you are. With nowhere else to go or do but BE. Be Seen. Be Met. Be Received. Be Served.

Michael O'Brien is the owner and founder of Craft Tea, herbal tea blends handmade in Philly. He specializes in unique and relaxing concept blends (like Wu-Tang or graffiti tea) that he then pairs with vinyl records that fit the vibe of each mix.

Steve Odell has been importing and studying tea for several years. He is based in Portland, Oregon and builds tea community through his tea space called Enthea Teahouse. He specializes in high quality Chinese teas and unique tea experiences that focus on human connection.

Adrienne Etkin Nascimento is the co-founder of Admari, a specialty tea and botanicals company that began in 2007 with a brick and mortar location in New Jersey, USA. In 2010, Admari shifted operations to Miami, Florida where she launched an event company under the same name creating conscious conference, event & retreat experiences using tea, movement, meditation & sound.

So Han Fan - Tea is the Seed

So-Han Fan is a Chinese-American from Texas. He grew up drinking Pu Er, oolong, and green tea at Chinese restaurants and in college began practicing the art of Gong Fu Cha, the Chinese tea service. He lived and worked in Chengdu, capital of Sichuan province, from 2010-2013 doing environmental research. During that time he developed relationships with a small handful of tea farmers and tea masters in Sichuan, Yunnan, and Guangxi. Upon his return he started West China Tea, initially just to acquire a single shipment of tea for himself and his friends. So-Han returns to China once or twice annually to source more teas along with business partners and staff, and now has teas from more than 38 different farmers, collectors, and tea masters across China and Taiwan. During this time West China Tea also developed a core team of dedicated tea servers, bringing gong fu tea service to a broad spectrum of parties, festivals, events, and conferences.

Mike Newton - Modern Living in the Way of Tea

Mike is a blogger at The Tea Letter and a student of Japanese tea ceremony in the Urasenke school. He came into tea via Chinese tea and gongfu style brewing and loves all tea, but Japanese green tea, roasted oolongs, and ripe puer in particular.

Soo Chung, the Director of Tea Creative, connects tea businesses with tea drinkers to flourish tea culture in the world. She has been working small and global tea businesses. On her spare time, she organises tea communities, Tea Drinkers in Korea, and Tea Drinkers in Australia. Her favourite holiday is spending days devoted to teashops, tearooms, tea factories, tea farms, and tea people in the industry.

Jonathan is a maker of teaware-- he has been working 10 years to develop his skills and resources to make woodfired pottery focused on gongfu tea service and am now taking that experience and developing a salable line of teaware for wholesale as well as unique tea arts pieces.

Kunikazu Mochitani is a newly established matcha tea grower and producer with a newly formed farmer group called Matcha Organic Japan. MOJ is a new company started in 2017 by involving the local young tea farmers. Each farmer has his own tea fields, passed down by generations of their ancestors. (One of the members is the 14th generation in his family to become the farmer now). This district has a problem of declining population in addition to the youth who do not have interest in continuing their family farm business, thus abandoning the tea field is a major problem. The location of MOJ is call Nabeshima village, use to make Sencha tea, but had similar problems, retired their business, and closed down the factory because of their age in 2016. So the local young farmers gathered and made a plan to make an Organic Matcha village. We started to convert the Sencha tea field to Matcha fields. Now the Tencha factory is under construction and the story will continue to future. 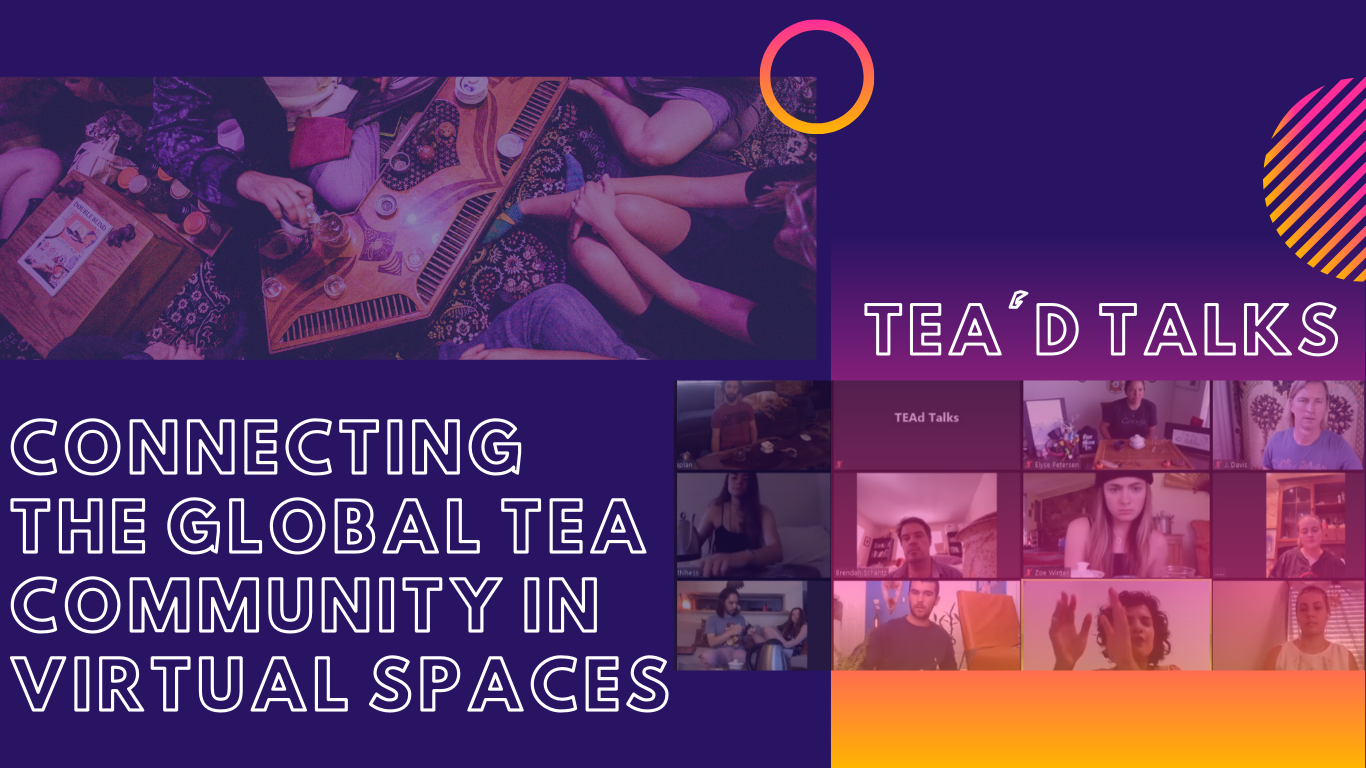 If you enjoyed your time meeting new tea friends in Sam's Zoom Rooms please consider joining him for a future event which he hosts of Thrusdays 2;3:30PM Pacific Time. You can keep up with all his event here.

THANK YOU FOR MAKING HISTORY WITH US IN CO-CREATING THE VIRTUAL TEA FESTIVAL! 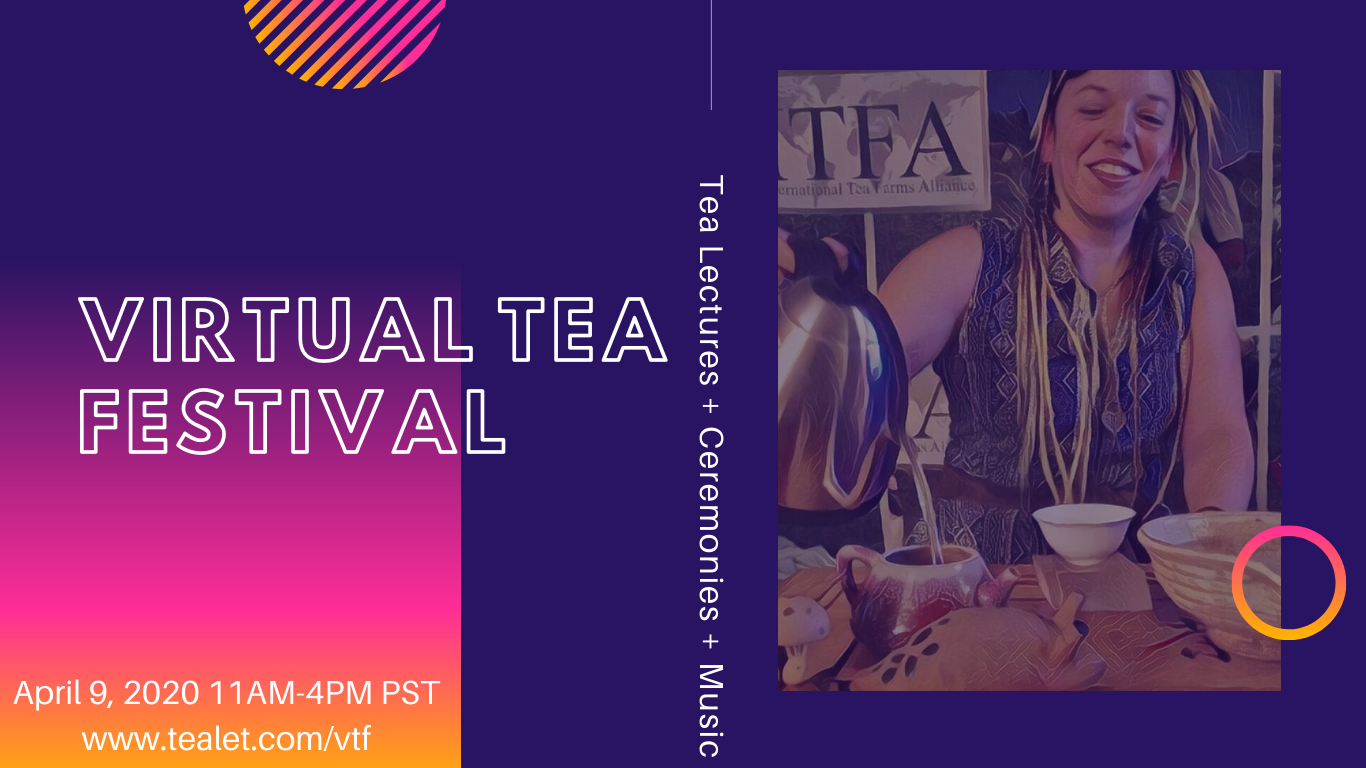