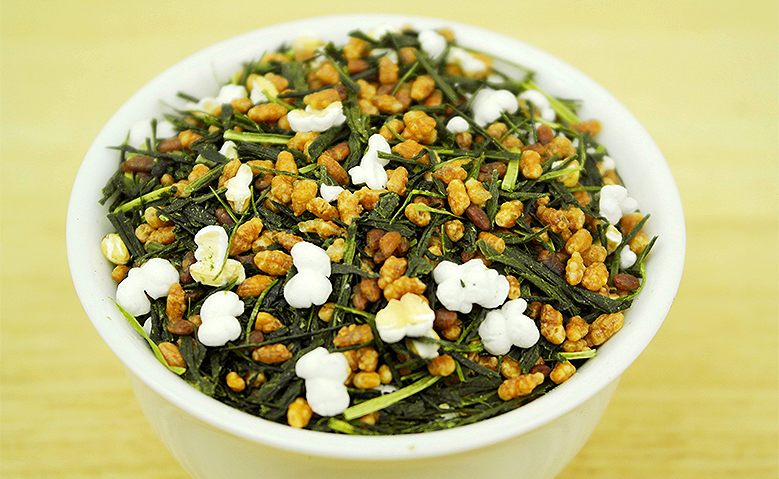 Cultivation: Natural (Organic, but no certification)

Genmaicha is one of Japan's most famous teas. Literally "brown rice tea", it is often found in Japanese restaurants and served alongside food. This is because of the warm, toasty, and approachable flavor.

Most genmaicha on the market is made using leaves from later harvests in the year, which tend to be weaker in flavor. The Kinezuka Family crafts this genmaicha from higher quality leaf material, using spring harvest leaves for a more vibrant, flavorful cup.

Genmaicha is a traditional blend, initially created as a peasant's tea. Green tea was expensive for the common people in feudal Japan. So, the peasants would mix rice with the tea to make it more accessible. To craft the tea, the raw leaves are steamed, resulting in green tea. The tea is then blended with toasted Japanese-grown sweet mochi rice. Some of the rice grains have popped into popcorn.

Genmaicha is a great introduction to the diverse world of Japanese green tea, with a sweet and nutty flavor with a rich savory warmth. It pairs well with food, and is great consumed at any point in the day.

The Kinezuka Family has been growing tea with all-natural methods for almost 40 years. Their farm and business, NaturaliTea, is headed by the father, Toshiaki Kinezuka. He is regarded as a pioneer in Japan for all-natural tea agriculture. The family's philosophy is to connect people, agriculture, and the environment in a harmonious way.

NaturaliTea is now being led by Toshiaki's eldest daughter, Ayumi Kinezuka. Her passion is to keep Japanese tea traditions alive, while also gaining knowledge from other tea traditions. She studied black tea production in Sri Lanka.

She works alongside her father, mother, younger brother, and younger sister on the farm. Their teas are grown at an altitude of 350m (1150ft), with the Yabukita cultivar.

Learn about the people behind this tea: The Kinezuka Family (NaturaliTea)

(no reviews)
This chart illustrates tasting notes most identified and their respective intensities (referring to Tea Cupping Standards by World of Tea).

Contact us to schedule an online meetup with this grower.